If you made it down to the hardware survey on the last post, you might have wondered where Intel’s newest mainstream architecture was. Ice Lake was missing!

Well good news: it’s here… and it’s interesting. We’ll jump right into the same analysis we did last time for Skylake client. If you haven’t read the first article you’ll probably want to start there, because we’ll refer to concepts introduced there without reexplaining them here.

As usual, you can skip to the summary for the bite sized version of the findings.

The Compiler Has an Opinion

All of these tests run at 3.5 GHz. The max single-core turbo for this chip is at 3.7 GHz, but is difficult to run in a sustained manner at this frequency, because of AVX-512 clocking effects and because other cores occasionally activate. 3.5 GHz is a good compromise that keeps the chip running at the same frequency, while remaining close to the ideal turbo. Disabling turbo is not a good option, because this chip runs at 1.1 GHz without turbo, which would introduce a large distortion when exercising the uncore and RAM.

Figure 7a
[link to this chart] [data table] [raw data]

Actually, I lied. This is the right plot for Ice Lake:

Figure 7b
[link to this chart] [data table] [raw data]

Well, which is it?

Those two have a couple of key differences. The first is this weird thing that Figure 7a has going on in the right half of the L1 region: there are two obvious and distinct performance levels visible, each with roughly half the samples.

The second thing is that while both of the plots show some of the zero optimization effect in the L3 and RAM regions, the effect is much larger in Figure 7b:

So what’s the difference between these two plots? The top one was compiled with -march=native, the second with -march=icelake-client.

Since I’m compiling this on the Ice Lake client system, I would expect these to do the same thing, but for some reason they don’t. The primary difference is that -march=native generates 512-bit instructions like so (for the main loop):

The observation that Figure 7a results from running 512-bit instructions, combined with a peek at the data lets us immediately resolve the mystery of the bi-modal behavior.

The performance follows a specific pattern with respect to the trials for both fill0 and fill1: it starts out slow (about 90 GB/s) for the first 9-10 samples then suddenly jumps up the higher performance level (close to 200 GB/s). It turns out this is just voltage and frequency management biting us again. In this case there is no frequency change: the raw data has a frequency column that shows the trials always run at 3.5 GHz. There is only a voltage change, and while the voltage is changing, the CPU runs with reduced dispatch throughput2.

The reason this effect repeats for every new set of trials (new buffer size value) is that each new set of trials is preceded by a 100 ms spin wait: this spin wait doesn’t run any AVX-512 instructions, so the CPU drops back to the lower voltage level and this process repeats. The effect stops when the benchmark moves into the L2 region, because there it is slow enough that the 10 discarded warmup trials are enough to absorb the time to switch to the higher voltage level.

We can avoid this problem simply by removing the 100 ms warmup (passing --warmup-ms=0 to the benchmark), and for the rest of this post we’ll discuss the no-warmup version (we keep the 10 warmup trials and they should be enough).

So we’re left with the second effect, which is that the 256-bit store version shows very effective elimination, as opposed to the 512-bit version. For now let’s stop picking favorites between 256 and 512 (push that on your stack, we’ll get back to it), and just focus on the elimination behavior for 256-bit stores.

Here’s the closeup of the L3 region for the 256-bit store version, showing also the L2 eviction type, as discussed in the previous post:

We finally have the elusive (near) 100% elimination of redundant zero stores! The fill0 case peaks at 96% silent (eliminated3) evictions. Typical L3 bandwidth is ~59 GB/s with elimination and ~42 GB/s without, for a better than 40% speedup! So this is a potentially a big deal on Ice Lake.

Like last time, we can also check the uncore tracker performance counters, to see what happens for larger buffers which would normally write back to memory.

Note: the way to interpret the events in this plot is the reverse of the above: more uncore tracker writes means less elimination, while in the earlier chart more silent writebacks means more elimination (since every silent writeback replaces a non-silent one).

As with the L3 case, we see that the store elimination appears 96% effective: the number of uncore to memory writebacks flatlines at 4% for the fill0 case. Compare this to Figure 3, which is the same benchmark running on Skylake-S, and note that only half the writes to RAM are eliminated.

This chart also includes results for the alt01 benchmark. Recall that this benchmark writes 64 bytes of zeros alternating with 64 bytes of ones. This means that, at best, only half the lines can be eliminated by zero-over-zero elimination. On Skylake-S, only about 50% of eligible (zero) lines were eliminated, but here we again get to 96% elimination! That is, in the alt01 case, 48% of all writes were eliminated, half of which are all-ones and not eligible.

The asymptotic speedup for the all zero case for the RAM region is less than the L3 region, at about 23% but that’s still not exactly something to sneeze at. The speedup for the alternating case is 10%, somewhat less than half the benefit of the all zero case4. In the L3 region, we also note that the benefit of elimination for alt01 is only about 7%, much smaller than the ~20% benefit you’d expect if you cut the 40% benefit the all-zeros case sees. We saw a similar effect in Skylake-S.

Finally it’s worth noting this little uptick in uncore writes in the fill0 case: 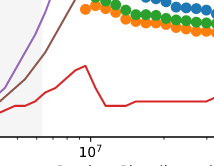 This happens right around the transition from L3 to RAM, and this, the writes flatline down to 0.04 per line, but this uptick is fairly consistently reproducible. So there’s some interesting effect there, probably, perhaps related to the adaptive nature of the L3 caching5.

If we rewind time, time to pop the mental stack and return to something we noticed earlier: that 256-bit stores seemed to get superior performance for the L3 region compared to 512-bit ones.

Remember that we ended up with 256-bit and 512-bit versions due to unexpected behavior in the -march flag. Rather they relying on this weirdness6, let’s just write slighly lazy7 methods that explicitly use 256-bit and 512-bit stores but are otherwise identical. fill256_0 uses 256-bit stores and writes zeros, and I’ll let you pattern match the rest of the names.

Here’s how they perform on my ICL hardware:

This chart shows only the the median of 17 trials. You can look at the raw data for an idea of the trial variance, but it is generally low.

In the L1 region, the 512-bit approach usually wins and there is no apparent difference between writing 0 or 1 (the two halves of the moon mostly line up). Still, 256-bit stores are roughly competitive with 512-bit: they aren’t running at half the throughput. That’s thanks to the second store port on Ice Lake. Without that feature, you’d be limited to 112 GB/s at 3.5 GHz, but here we handily reach ~190 GB/s with 256-bit stores, and ~195 GB/s with 512-bit stores. 512-bit stores probably have a slight advantage just because of fewer total instructions executed (about half of the 256-bit case) and associated second order effects.

In the L2 region, however, the 256-bit approaches seem to pull ahead. This is a bit like the Buffalo Bills winning the Super Bowl: it just isn’t supposed to happen.

The 256-bit benchmarks start roughly tied with their 512 bit cousins, but then steadily pull away as the region approaches the full size of the L2. By the end of the L2 region, they have nearly a ~13% edge. This applies to both fill256 versions – the zeros-writing and ones-writing flavors. So this effect doesn’t seem explicable by store elimination: we already know ones are not eliminated and, also, elimination only starts to play an obvious role when the region is L3-sized.

Let’s concentrate only on the two benchmarks that write zero: fill256_0 and fill512_0, and turn on the L2 eviction counters (you probably saw that one coming by now):

Only the L2 Lines Out Silent event is shown – the balance of the evictions are non-silent as usual.

Despite the fact that I had to leave the right axis legend just kind floating around in the middle of the plot, I hope the story is clear: 256-bit stores get eliminated at the usual 96% rate, but 512-bit stores are hovering at a decidedly Skylake-like ~56%. I can’t be sure, but I expect this difference in store elimination largely explains the performance difference.

Normally I’d take a shot at guessing what’s going on here, but this time I’m not going to do it. I just don’t know9. The whole thing is very puzzling, because everything after the L1 operates on a cache-line basis: we expect the fine-grained pattern of stores made by the core, within a line to basically be invisible to the rest of the caching system which sees only full lines. Yet there is some large effect in the L3 and even in RAM10 related to whether the core is writing a cache line in two 256-bit chunks or a single 512-bit chunk.

We have found that the store elimination optimization originally uncovered on Skylake client is still present in Ice Lake and is roughly twice as effective in our fill benchmarks. Elimination of 96% L2 writebacks (to L3) and L3 writebacks (to RAM) was observed, compared to 50% to 60% on Skylake. We found speedups of up to 45% in the L3 region and speedups of about 25% in RAM, compared to improvements of less than 20% in Skylake.

It is an interesting open question whether the as-yet-unreleased Sunny Cove server chips will exhibit this same optimization.

Unless you are developing only for your own laptop, as of May 2020 Ice Lake is deployed on a microscopic fraction of total hosts you would care about, so the headline advice in the previous post applies: this optimization doesn’t apply to enough hardware for you to target it specifically. This might change in the future as Ice Lake and sequels roll out in force. In that case, the magnitude of the effect might make it worth optimizing for in some cases.

Vijay and Zach Wegner for pointing out typos.

Saagar Jha for helping me track down and fix a WebKit rendering issue.

If you have something to say, leave a comment below. There are also discussions on Twitter and Hacker News.

Feedback is also warmly welcomed by email or as a GitHub issue.